Here at Carterton Community College we are fortunate that our Service students have a wide variety of different experiences, of life in school and outside of school both before their time with us and whilst they are at secondary school. We therefore believe that through a carefully resourced and organised pastoral team we can offer individualised support for our students particularly at times of postings and deployment. Our team comprises a School Counsellor, Form tutors, Heads of Houses, a mentoring system, Service Ambassadors, clubs and a Service hub where they can meet with mentors and peers and are also able to contact deployed parents). We link with Brize Norton Community and Families which enables us to anticipate the effects of deployments and to enrich our joint provision for Service students. Deployments can disrupt education, friendships and social networks as well as education. Our transition team from day one will ensure that we make it as smooth and comfortable for the student as is possible, and support their resilience in times of change.

We are incredibly proud of what our Service students represent and the huge contribution they make to the school through student leadership, mentoring, and representing the school including the recent ‘Little Troopers’ podcast which aims to support other service students nationally. We use opportunities to share these with the school and local community and have termly events to highlight the positives that our proximity to RAF Brize Norton affords. We are actively involved with our local Primary and Secondary schools in improving provision for Service students and we are committed to the Oxfordshire Service Pupils’ “Promise”. Our links with Study Higher through Oxford Brookes University provides opportunities for Service Students to experience horizon widening enrichment to encourage them to aim high and increase the numbers of Service students applying to and taking up places at university.

Month of the Military Child – April 2022

Please see below document outlining all the fabulous events we have had in school to celebrate Month of the Military Child.

Month of the Military Child

Please find below the link to our Deployment Form.  Completion of this form will help the school support your child/children during times of Operational Deployment. 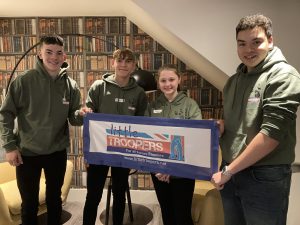 Four teenagers from Carterton Community College have been picked by a national military children’s charity to star on a new podcast about Armed Forces life.

Alfie Crabb (15), Alfie Savage (14)  Kayleigh Lundy (14) and Kieran Everett (15), pictured above are four of 15 military teens who appear on SQUAD, a podcast by Little Troopers – the UK’s only charity to support all children who have parents serving in the British Armed Forces.

Presented by TV & radio broadcast and mental health ambassador, Katie Thistleton, and Leicester Tigers rugby player, Thom Smith – who also grew up in a military family, the eight-episode podcast sees the Carterton teens and other guests share their personal experiences of being a service child and their views on some of the unique challenges that service children face including deployment and separation, schooling, moving home and forming new friendships.

Kieran, Alfie, Kayleigh and Alfie were put forward for the podcast by their teacher, Mrs Hannah Owen, after Kieran and Alfie started their own ‘service club’ in school to regularly bring together children who have parents serving in the Armed Forces.

Kieran Everett, comments: “I think military children all have a special bond as we all share very similar experiences. We understand each other and know how to support each other. Not all young people from forces families are lucky enough to have a service club in school which is why I think the Little Troopers podcast is such an important project and I’ve been so pleased to be involved. I hope other military teens take comfort and ease of mind from listening and hearing from other young people who feel the same as they do.”

Funded by the Armed Forces Covenant Trust as part of the ‘Little Troopers at School’ project, the aim of SQUAD is to help military teenagers across the British Armed Forces community feel recognised and understood by hearing from other children who live in similar circumstances and share similar life experiences.

Louise Fetigan, Founder of Little Troopers, explains: “It’s so important to our charity that people don’t forget about military teenagers and that they are given the chance to have a voice and hear from each other about their experiences of military life. We hope that lots of military teens will listen to SQUAD at home and that secondary schools will also find value in bringing their military children together to listen in class and use it to spark further conversation about military life in school.”

Presenter, Katie Thistleton, whose credits include BBC Radio 1 and CBBC amongst others, added: “I’ve loved hosting the SQUAD podcast. It’s been fantastic to meet so many inspiring young people who have grown-up in an Armed Forces family and to give them a platform where they can share their stories and chat about what life is like from their point of view. Thom and I have been the presenters, but SQUAD is all about military teens; it’s their podcast and they have led the conversation in a really fun, honest and relatable way that will resonate with the thousands of other teenagers across the British Armed Forces community who share similar experiences. I hope everyone enjoys listening to it as much as we have enjoyed recording it and that it helps other military teens realise they are part of an amazing community of young people just like them.”

The first episode of SQUAD can be found here.   For more information visit www.littletroopers.net

Little Troopers is a registered charity supporting service children who have parent(s) serving in our British Armed Forces, regular or reserve. These children often face unique challenges including frequent house and school moves, as well as regular periods of separation from their serving parent(s) for varying lengths of time due to exercises, training, operations and other service commitments.

As a charity, Little Troopers ensures our British Armed Forces children and their families have access to child-focused support wherever they are in the world and whatever community they live in. We provide fundamental resources and initiatives to help ease repeated separation periods and keep parent and child connected even when miles apart.  We are the only charity in the UK dedicated to celebrating just how special all our Little Troopers out there really are.